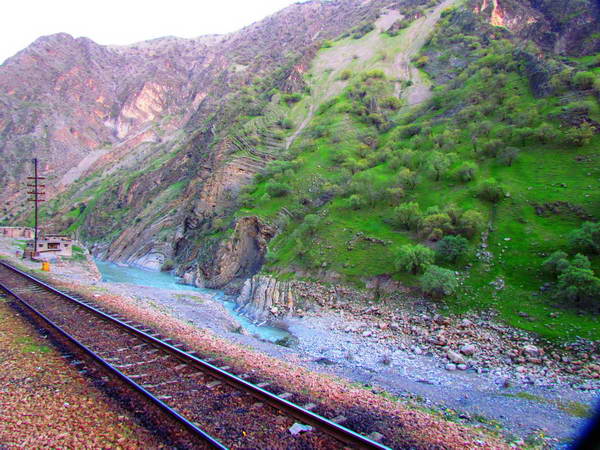 In Doroud to Andimeshk nature tour, we will travel by local trains and during the trip, we will see the beautiful nature of the Zagros Mountains and oak forests along the Sezar River. We will visit Bisheh waterfall and then we will take a walk in nature from Taleh Zang village to Shevi village and then to Shevi waterfall. This nature tour is two to three days and we spend the night in the villages of the region. Inhabitants of this region are people of Bakhtiari in Lorestan and Khusestan Provinces.

Bisheh waterfall, in the velvety nature of the Zagros slopes

Bisheh waterfall is one of the waterfalls of Lorestan province near Dorud city. The way to reach this waterfall is usually by local trains that go from Droud to Andimeshk and along the way you will see beautiful views of the Zagros mountains and the Sezar river.

Bisheh Railway Station is a beautiful station from the side wall of which the water coming from the upstream springs falls in the form of small waterfalls. This water passes through a series of pipes that are installed under the railway tracks and comes to the other side of the rails and finally flows into a beautiful valley 50 meters deep downstream of the station. In the valley below this station, the Sezar river flows. At the bottom of the valley can be seen that a beautiful waterfall falls from the water that flows from the village of Bishe and near the railway station and joins the Sezar river. This beautiful and high waterfall is known as Bisheh waterfall and attracts many tourists to this area, especially in spring and summer.The best season to visit Bisheh waterfall is in early spring, when the velvet green grassland covers the slopes of the mountains in these areas, and the oak trees have added to the beauty of this area.

Along the Sezar river, In a Bakhtiari region

The Zagros mountain range between Lorestan and Khuzestan and along the Sezar River has a green and pleasant nature. Bakhtiari tribes live in the villages of this region. There are several beautiful and large waterfalls such as Bisheh waterfall and Shevi waterfall (Tale Zang), in this area. There are several beautiful villages in this way , villages like Bisheh Village, Talehzang Village and Shevi Village.
It is better to see the beauties of this route from inside the train that goes from Dorud to Andimeshk.

Shevi Waterfall (Or Tale Zang Waterfall), is a beautiful and vast waterfall in a pristine area in north of Khuzestan and next to Lorestan province. There is another waterfall and pond above the main ( first) waterfall.
A type of salamander called “Emperor Salamander” lives in the waters of this region.
Due to the distance and difficulty of access, this waterfall has been remained relatively pristine.