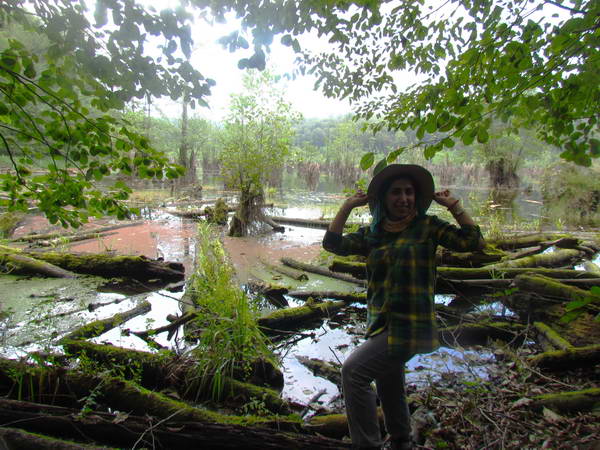 The destination of our nature tour this time is part of the wetlands and natural attractions of west of Mazandaran. In this two or three day nature tour, we visit the Ghost Lake (Mamraz), Farakhin wetland lake and Danial Cave. We will also have a walk in the forests between Abbas Abad and Kelardasht around the Darasara, a forest village. We will also visit the city of Salmanshahr (Swan Motel or Motel Ghoo).

Mamraz Lake, known as the Lake of ghosts, is a small lake in the heart of the forested heights between Nowshahr and Noor in Mazandaran province.

This small lake is swampy and trees with broken trunks have emerged from the water of the lake. The roots of the trees on the forested shore of the lake protrude from the soil and give the trees a special and ghost-like state.

The combination of these features has made the lake swampy and mysterious and looks like a place of ghosts.

You will see colorful and beautiful mushrooms on the rotten and mossy bodies of fallen trees in this area.

The lakes and forests of this area are among the protected areas, and for this reason, the lake and the surrounding forests have remained largely pristine. The seclusion of this area on the depths of the forest has also helped to make it scary.

To access this lake, it is better to get help from GPS. A side road that stretches south in the middle of Nowshahr to Noor road, between the villages of Salaheddin Kola and Vanoosh, will take you to the entrance of the protected area of ​​this area after three kilometers. Tourists are usually allowed to enter the area. After that, you have to move 10 kilometers in a dirt and rugged but beautiful forest road to reach the Mamraz lake signpost. After that, you will reach the lake with a half-hour walk.

Farakhin Lake is actually a beautiful forest lagoon located in the heart of the forests of the southern highlands of Nowshahr in Mazandaran province.

Farakhin wetland and the surrounding forest trees have created one of the most beautiful dream landscapes.

The reflection of broadleaf trees in the water in the lagoon has created the best scenery for nature photography.

The reflection of sound in this mountainous forest area on both sides of the lake evokes a dreamy paradise atmosphere.

Near this lagoon, there is a flat area empty of trees, which has created a suitable space for setting up tents and camp.

In the forest around the lagoon, you can see many beautiful and colorful fungi that often grow with moss on the surface of fallen trees in the forest. There is also a spring downstream of this lagoon.

It is important to note that to drink water from this spring (like most springs in the forest), it is best to disinfect the water with chlorine tablets or by boiling water.

Salmanshahr (Swan Motel) a touristic beach on the Caspian Sea

Salmanshahr, still known by its old name, Swan Motel (Motel Ghoo), has several tourist attractions that make it one of the most touristic beaches in the north of Iran.

The sandy beach with water sports facilities, 25-story Diamond Swan Towers (Azimzadeh Towers) and proximity to other entertainment centers such as Namak Abroud, fills the coastal city with tourists on summer days.

Apart from the beautiful beach, the lush forest nature in the southern part of Salmanshahr and also the Danial Cave in this area are other natural attractions of this coastal city.

Part of Salmanshahr has become a private village with large, luxurious, beautiful and green villas.

In October, when we went to visit Danial Cave in the village of Daniel, south of Salmanshahr, the lush gardens on the outskirts of the village were so green that we thought we were in a fresh spring season. The trees were brightly colored, polished and had a spring glow.

Daniel Cave is a relatively long water cave that is relatively easy to reach because it is located 5 km south of Salmanshahr (Swan Motel 0r Motel Ghoo) in Mazandaran province.

To reach Danial Cave, move from Salmanshahr to Danial village in the south of this city and another two kilometers from Danial village to the south until the road ends and reaches the river. From here, cross the bridge over the river and walk one kilometer south along the river to finaly reach the mouth of the cave of Danial, which is under the white wall of the mountain.

Danial Cave is about two kilometers long and in parts of the trail in this cave you have to move through the water.

You will also see bats hanging from the ceiling of the corridors or the large hall of the cave. In parts of the route, bat droppings have made the route slippery.

Darasara village is a beautiful village in the heart of the forests of Abbas Abad region and its most important feature for nature lovers is the existence of a beautiful forest road that starts from Darasra and goes a few kilometers in the forests of this area. A pristine and secluded path for nature lovers who are looking for beautiful natural and pristine paths. Although this path ends at a dead end and you have to go back, but in total you can spend a half day or a day in a very beautiful nature on this path.

Another thing that is interesting in the village of Darasra is the existence of an old bath with a dome like roof, which is still active as a public bath in the village.

The forests between the towns of Abbas Abad and Kelardasht are among the Hyrcanian forests that are especially known to nature lovers. The road from Abbas Abad to Kelardasht passes through this mountainous forest. The presence of very tall and beautiful trees is one of the characteristics of the forest in this area.

On returning from the tour