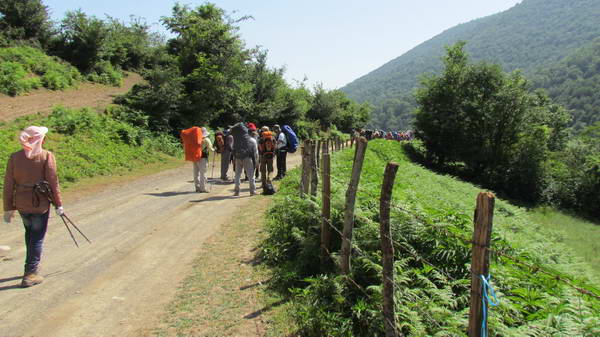 In a two-day hiking, we start from the heights near the town of Khalkhal in Ardabil province and after passing through the pastures and forests of Talesh region, we reach near the town of  Asalem in Gilan province.

Seven kilometers north of Khalkhal, we start climbing to the northern heights of this promenade. After an hour of walking on a relatively steep slope, we reach the Givra pass. From now on, the whole route is in descending mode and decreasing in height.

The weather in Givra pass is usually accompanied by relatively strong winds, rain and thunderstorms. The height of this pass is about 2500 meters above sea level and at the end of the second day we should have reduced the height to reach Laketashun village in 10 km of Asalem asphalt road to Khalkhal, which is about 330 meters above sea level. In total, with about 33 kilometers hiking, we have to reduce the altitude by about 2100 meters.

This is a heavenly path. An old route that connects Khalkhal in Ardabil province to AsaIem in Gilan province and passes through the pastures and forests of Talesh. On this route, we pass Khareh Khooni summer and some villages such as Nav village and visit Daryabon waterfall.

Seven kilometers west of Khalkhal town, there is a promenade which is called Andabil (Biladir) promenade due to its proximity to Andabil village. There is also a spring in this promenade.

Another feature of this promenade is that by climbing a pass in the heights of here (Givra pass) we reach the border between Khalkhal and Talesh region where the view of wide and beautiful plains and forests of Gilan is exposed to your eye. This pass with an altitude of 2500 meters above sea level is very windy and is usually accompanied by lightning and thunderstorms and clouds coming from the Caspian Sea.

The old route between Khalkhal and Asalem towns starts from the Andabil and Givra pass until after passing through the villages of Nav, Se Nav, Daryaben and Laketashun in the forest and plains of this region, it reaches ten kilometers of Asalem on the new and asphalt road of Asalem to Khalkhal.

Summer resorts are relatively flat areas of natural pastures and meadows that are usually used to shelter local shepherds and nomads in the heart of the forest and mountains. In this summers usually there are cottages for temporary residence of nomads or keeping their animals. This summers often have a spring near them.

Mountaineers use their summers to relax and camp at night.

Khareh Khooni Summer is located on the old path from Khalkhal to Asalem and is usually used as a night camp for hikers of this route.

There is a small village upstream of this summer and the tap water and toilet created by the residents in this summer can be used. Villagers can be ordered local dairy or maybe even cooked meal.

Nav village is one of the most beautiful villages in the Talesh forest area, which is located on the old road from Asalem to Khalkhal.

The nature walkers who start their trekking from Andabil (Khalkhal) area on the old path to Asalem, after passing through the vast and beautiful heights and plains of Givra pass and Khareh khooni summer, reach Nav village, whose huts are on both sides of the river.

Asalem town is about 30 km away from Nav village.

Daryabon waterfall is a waterfall with a height of about 30 meters in a beautiful forest area in the forests of Talesh.

The access route to this waterfall is through the old Asalem to Khalkhal route.

About twelve kilometers from Asalem on the Asalem asphalt road to Khalkhal, in about Laketashoon village, enter a side road which will reach Daryabon village after ten to fifteen kilometers on a forested mountainous dirt road. To reach the waterfall, you have to walk for half an hour to the fish pond in the heart of the forests of this area. Then after passing through a beautiful mountain gorge you will reach Daryabon waterfall,

On the way from Khalkhal to Asalem, we passed summers such as Khareh Khooni summer and villages such as Nav village. The inhabitants of these villages and nomads of this region are from Talesh tribe. Here are some pictures of these warm and friendly people.

The Hyrcanian forests along the Caspian Sea are among the most famous forests in the world in terms of tree diversity. On our way from Khalkhal to Asalem, we passed through the mountain forests of Talesh region. Here are some pictures of these beautiful and compact forests.