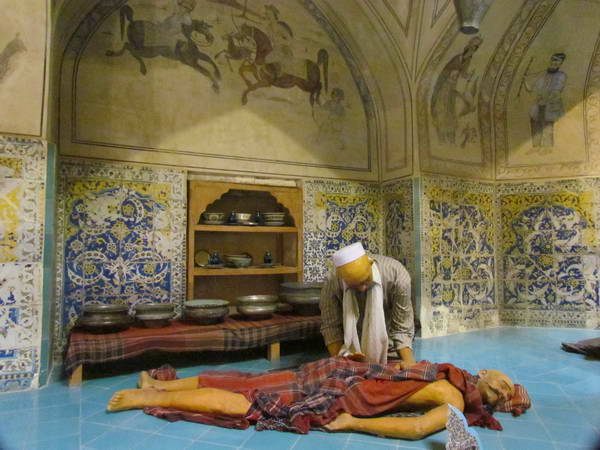 Now, in our fifth tour in Isfahan, we see historical monuments in the old part of Isfahan. In this tour, we will visit Seyed Mosque, Ali Gholi Agha Bath and the historical houses of Sarai Badie and Sheikh ol-Islam House (Museum of Textile handicrafts) . Also we can visit some new mansions that are built with a design of historical monuments.

Seyed Mosque, magnificent architecture of the Qajar period in Isfahan

Seyed Mosque is one of the great and historical mosques of Isfahan  which was built during the Qajar period and is one of the main mosques of this city. This mosque, which has semi-functional decorations, has four main doors, two forty columns  large naves, a dome, three porches and more than 45 rooms, but it does not have a minaret. Also, the inside of its naves is not tiled.

Seyed Mosque is one of the masterpieces of Qajar architecture due to its beautiful tile and calligraphy decorations of this period.

In facade tiling of the building of this mosque, red color has been used a lot, which is one of the features of architectural decorations in the Qajar period.

Numerous rooms around the wide courtyard of Seyed Mosque are used by religious students. There is a building with an architecture similar to the Chehel Sotoon architecture on the upper floor on the east side of the mosque, which was apparently used by Seyed Mohammad Baqer Shafti, the builder of this mosque. Seyed Mohammad Baqer Shafti was an influential cleric of Isfahan during the reign of Fath Ali Shah Qajar, when the construction of the Seyed Mosque began. His tomb is located in the northern part of the mosque and has beautiful and remarkable architecture and tiled decorations.

Ali Gholi Agha Bath in Isfahan is a historical bath left from the late Safavid period, which was built in 1125 AH. This bath is currently open to the public as the Anthropological Museum of Isfahan.

Ali Gholi Agha was one of the Safavid courtiers and in addition to this bath, he also built a bazaar and a mosque next to it, all of which are named, Ali Gholi Agha.

The architecture of this bath is of Isfahan style architecture in the late Safavid era. The bath consists of two large and small bathrooms and a pool area, so that men and women could use it separately. Each of these two baths consists of two main parts, an entrance room ( Sarbineh ) and the main bathroom hall ( Garmkhaneh ).

The sarbineh of the large bath is designed in the shape of a regular octagon mansion. Some platforms are designed around the Sarbineh, the spaces behind which are decorated with circular arches. Also, the middle dome of Sarbineh is based on eight large stone pillars. The ceiling decorations of the bath are simple but beautiful. The skylights are regularly designed in the middle and around the ceiling of bath. These skylights adds to the beauty of the ceiling decorations at different times of the day by creating a light shade.

At present several replica of Safavid people are placed in the Sarbineh ( entrance room ) of this bath that show the traditional clothes and ceremonies of that time.

Sarai Badie, an old house in Isfahan belonging to the Safavid period

Sarai Badie is one of the old houses belonging to the late Safavid period in Isfahan. This building was formerly known as the House of Hajj Rasooliha, but was later purchased by Mr. Badiee and rebuilt within ten years according to the original model of the Safavid period, and is now known as Sarai Badie.

Sheikh ol-Islam Historical House in Isfahan is a historical house pertaining to the Safavid period, which was later changed during the Qajar period, and is currently housed by the Isfahan Cultural Heritage Organization, a Museum of Textile Handicrafts.

During the Safavid period, at the request of Shah Suleiman the Safavid, Allameh Mohaghegh Sabzevari (Molla Mohammad Baqir Sabzevari) was invited to come to Isfahan and take the position of Sheikh ol-Islam in Isfahan. This house was also given to him by the Safavid king to live in it and to deal with government affairs.

In 1986, during the Iran-Iraq war, part of the house of Sheikh ol-Islam was completely destroyed, and later part of it was rebuilt and part remained as a relic of the war.

Sheikh ol-Islam House is now used as a museum of handicrafts related to traditional textiles such as glabton, gold weaving, cashmere weaving, traditional dyeing and weaving and other textile handicrafts.

New buildings in the form of antiquities in Isfahan

Isfahan is the cradle of art and crafts. In the meantime, you will find new buildings decorated in the style of historical monuments in Isfahan. An example of this is the Bastani restaurant on the south side of Naghshe Jahan Square, whose architectural style and murals and decorations are similar to those of historical monuments.