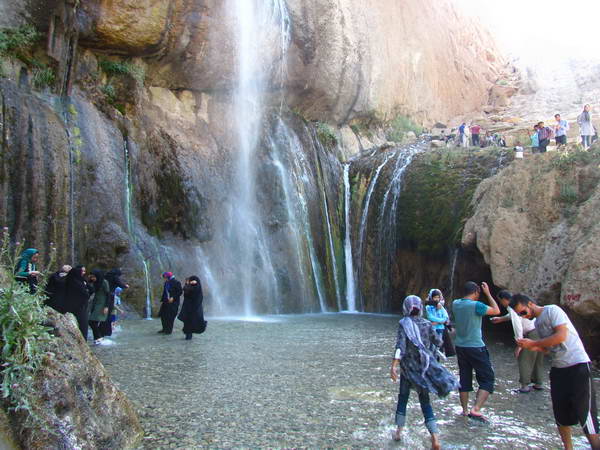 In this two to three day nature tour, we meet the beauties of the semi-mountainous region of Semirom county in Isfahan Province and get acquainted with the Qashqai nomads of the region. In this tour, we will visit the waterfalls of Semirom, Bibi Seyedan and Ab Malakh. We will spend the night in the village of Khafr on the slopes of Qash Mastan peak in the Dena mountain range, and we will visit the Qashqai nomads in the Dasht-e Bal region, and maybe spend the night with them.

Semirom is a cold city in the south of Isfahan province and towards the Dena mountains.

Semirom, is a city that sits on the slopes of the heights, and springs and streams of water flow in the heart of this city. On one of our previous trips to Semirom, had been erupted a fountain in the lobby of the guest house where we stayed.

Semirom has several natural attractions around it.

Semirom waterfall is not far from this city.

Bibi Seyedan and Ab Malakh waterfalls are located about 45 km south of Semirom.

Khafr village, which is the origin of hiking Dena Mountain (Climb to Qash Mastan), is located in the south of Semirom city.

The distance from Semirom to Isfahan is about 165 km.

Semirom waterfall is located a few kilometers on the outskirts of Semirom. Semirom is a cold city in the south of Isfahan province and towards the Dena mountains.

By paying an entrance fee for each car, we reach the parking lot under the waterfall. It is Thursday and the parking lot is crowded and full of cars. On holidays, the crowds of tourists in Semirom waterfall increase.

We have a short walk from the car park to under the waterfall. In this direction, we move in the vicinity of a stepped stream that directs the water that flows from the waterfall downstream. On both sides of this wide and stepped stream, many mats have been spread and a number of tents have been set up. In some parts of the route, we have to move between the mats and tents, which of course is a pleasure for us to be close to people and families.

Semirom waterfall is a relatively high waterfall whose water flows down from a small river that flows in the upstream heights. The beauty of this waterfall is due to the moss stones enclosing the walls of the waterfall. The waterfall has several walls in its lower half.These walls create a cave-like environment under the waterfall. Also, a pool of clear water with a bed of beautiful stones has been created under the waterfall. Standing in this pond and among the cave walls like a waterfall gives us a special feeling and vitality.

Bibi Seyedan waterfalls and river in the south of Semirom

The water that comes from the heights of this region forms a shallow river in a valley path. Along its path, a series of springs and small waterfalls are added to the running water, from the walls of this valley. These springs create a mossy green cover on the valley rocky walls. Also ponds along this small river have provided conditions for swimming and bathing in a clear water.

This natural water complex attracts many tourists, especially on holidays.

Ab Malakh waterfall, 50 km south of Semirom, is a unique waterfall. A small river that originates from a spring above a stone bridge, flows into the river and thus a beautiful curtain waterfall is formed from the top of the bridge into the river. The Marbor River has strong waves in this part of the route.

The roaring river of Marbar is a river that originates from the heights of Padna region of Semirom city in Isfahan province and finally flows into Khersan river, which finally joins Karun river.

On a part of this river near the village of Ab-Malakh, a natural bridge has been created, that is, a part of the mountain is placed on the river like a rock and a huge boulder, and the Marbor River flows through a mouth below this rock.

The water of a spring, falls right from the top of this huge boulder into the Marbor River. The cave and spring of this waterfall are also located on the rocks of this boulder.

This huge rock is called Takht-e-Soleyman ( that means the Throne of Solomon ).

A part of the spring water above Takht-e-Soleyman flows into the Marbar River from the back of the rock, which is also very spectacular, but the access route to there is difficult and River becomes extremely roaring and dangerous there. The Marbor River has taken the lives of several people in this part of its route so far.

This exceptional complex of cave, spring, river, natural ston bridge and waterfall is unmatched in Iran.

To reach Ab Malakh and Takht-e-Soleyman waterfall, move from Semirom road to Yasuj. Forty kilometers later, you will reach a three-way road that will take you to Yasuj on the right. Keep moving in the same direction to the right. After about five kilometers, you will reach a side road that you have to enter to reach the village of Ab Malakh after five or six kilometers. From here, the trek to Ab Malakh waterfall begins, which takes about half an hour.

The dirt road of Ab Malakh village is relatively good and can be moved by cars.

Very important point : If you went to this waterfall and went to the flat rocks of the river to photograph the waterfall and the mouth of Takht-e-Soleyman, be very careful not to fall into the river, because the water takes the person away with pressure and the river Behind the bridge hits the rocks extremely fiercely and dangerously.

Khafr village is about 2200 meters above sea level and is a cold and snow-covered village.

A waterfall is located in the heights of Dena Mountain in this area, which is called Khafar Waterfall due to its proximity to Khafr village.

Around the village of Khafr and at the foot of Dena Mountain, there are many apple orchards and in fact, the best apple of Isfahan is obtained in the Khafr region.

The inhabitants of Khafr village are Persians, but the Qashqai nomads come to the summer plains around Khafr, such as the Bali plain, for their summer migration.

Climbers pass through Khafr village to climb Qash Mastan peak, which is the highest peak of Dena mountain range, and sometimes spend the night in this village.

To reach Khafr village, you have to move from Semirom to Yasuj. About forty kilometers on the Semirom to Yasuj road, you will encounter a three-lane road. You must choose the road on the left that leads to Hana. After 15 km, you will come to another crossroads, this time you have to enter the road on the right, which finally after another 15 km and after crossing the bridge over the Marbar River, you will reach the village of Khafr.

Bal Plain (Dasht-e Bal)  summer is a summer upstream of Deli village. Deli village is a small village on the banks of the Marbar River in the Padna region of Isfahan. This village is located in the eastern part of Khafr village in Padena region.The pastures of Bal Plain on the slopes of Dena Mountain are used by Qashqai nomads in summer and they set up their nomadic tents there.

The nature lovers willing to get acquainted with Qashqai nomads go to their summer resorts in Bal Plain.

To reach Bal Plain area, you have to come to Khafr village at the foot of Dena mountain via Semirom-Yasuj road. Then, through the dirt road that connects the village of Khafr to the village of Deli through the heights of the slopes of Dena Mountain, after eight kilometers, you will reach the plains of Dena slopes in the Bal plain, where nomadic tents are set up.

Also, the dirt roads of this area are used for mountain biking.

Before describing the Qashqai wedding, it is better to give an explanation about the Qashqai people.

The Qashqai tribe is one of the great tribes of Iran. The Qashqai people are Turkic-speaking and live mainly in the central regions of Iran. The Qashqai people live mainly in Fars, Chaharmahal and Bakhtiari, Kohgiluyeh and Boyer-Ahmad provinces, but they also live in other central areas of Iran, such as Semirom and Fereydan counties, and in parts of Khuzestan and Bushehr provincies. Qashqai nomads also migrate between the southern and central provinces of Iran in different seasons of the year. (Summer and winter). Most of the nomads in Fars province are Qashqai.

Qashqais are happy people and one of their interests is to participate in celebrations and happy ceremonies. In special ceremonies, celebrations and weddings, the people of this tribe stand around a large circle while holding handkerchiefs and shake the handkerchiefs in a rhythmic manner along with the song of drum. They also have another dance called Choob Bazi or Darmaro. In this dance, the men of the tribe take turns dancing in pairs with two sticks, one short and the other long, and they hit the sticks to each other legs.

The women of this tribe wear colorful and varied clothes, including multi-layered skirts, tunics and short sweaters, and they also wear lace scarves on small hats. Of course, today, many families and women of this tribe, due to urbanization, do not always wear traditional clothes, but in weddings and local celebrations, they wear their beautiful and colorful traditional clothes and dance all together.

Undoubtedly, the great Qashqai tribe is one of the most attractive nomadic peoples in the world. People who, despite the passage of time and the invasion of modernity, still maintain their customs and enjoy life in a beautiful nature. The black tents, women in a thousand colors and happy clothes, the pleasant and energetic melody of Qashqai music, traditional foods and snacks, and finally the hospitality and kindness of the Qashqai people are the main reasons for the popularity of these lovely people.

The pictures you will see are related to a Qashqai wedding in Bideh village in Padena area of Semirom city. This wedding belonged to my friend, Behnam Moradi, who wanted to contribute to the revival of the ancient and beautiful traditions of this people by performing his wedding ceremony traditionally. In this wedding, women wore local clothes, although men did not wear traditional clothes.