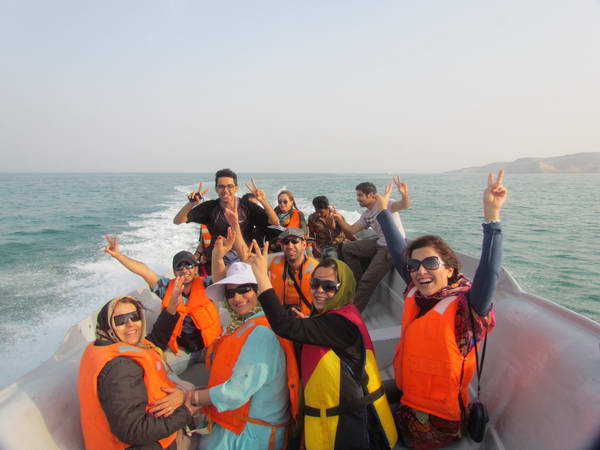 In this section of tour I take you to tourist sites located at southern shores of Qeshm Island. we also go to Hengam Island, near the south coasts of Qeshm Island. In this tour we have come from Bandar Abbas to Qeshm city (capital of Qeshm island) and after visiting this city (Zeytoon Park) we now begin our trip to visit Khorbas Cave, Stars Valley, Naz Islands, Hengam village & Island, Salakh town and the famous Salt Cave.

Khorbas cave is located in the southern part of Qeshm Island, 15 km from Qeshm city to Souza road. This is the road that leads to the valley of the stars.

The structure of Qeshm mountains and heights is generally composed of dense and hardened sands. The erosion due to natural events in these sand boards is not far from expectation, such as erations that heave been happened in the beautiful valleys of Chahkooh Strait or the Stars Valley in Qeshm.

Khorbas cave, which includes several openings in the wall of a low mountain, was created in the same sand slabs, but most of these openings and corridors behind them, which are related to each other, are handmade and due to the work of people of the past. As in recent times, carving designs have been added to the walls of these corridors.

The only part of the cave that is natural is the hole  which is located on the lower floor of these openings.

Qeshm Stars Valley is a relatively large area of ​​cuts and crevices that have been created on the ground and have created hollow or wide corridor spaces in this area. The general view of this area is like a wide and deep valley with numerous cracks and strange shapes in its walls.

This place was formerly called the Fallen Star because it was a myth that the area was created by a falling star on Earth. But the truth of the matter is that the erosion caused by water and heavy rains on the sandy structure and loose lands of this region  has caused the creation of these beautiful and amazing effects in this region over the years.

The distance between the Stars valley and the city of Qeshm is not very long. This valley is located twenty kilometers west of Qeshm and can be reached via the Qeshm-Suza road (the same road that goes from Qeshm to Naz and Hengam islands).

Naz Islands and the Paragliding Site

Naz Islands are two small islands one kilometer off the south coast of Qeshm Island that reach the shores of Qeshm at low tide and become a separate island off the coast at high tide.

These two islands are located 22 km west of Qeshm and to reach them you have to enter a road that reaches the village of Suza from Qeshm city. This is the same road through which you can reach the Khorbas Cave and the Stars vallay. Through this road after Naz Islands you will reach the town of Suza, and then to the Shib Daraz port, where you can board a boat to go to the Hengam island.

The shores of the Naz islands are rocky, but the coast of Qeshm Island near these islands is sandy.

At low tide, you can walk the distance between Qeshm beach to the islands by foot, but in high tide, you have to travel this distance by a boat.

On the sandy beaches of Qeshm near Naz Islands, recreational facilities such as paragliding, camel riding and boat riding have been provided.

Hengam Island is located near to Qeshm Island, in south of it. This Island belongs to Hormozgan Province. Hengam Island is about 9 km long and 6 km wide, and the length of the road around Hengam is about 45 km.

The crocodile farm is located on the west coast of Hengam Island. The sparsely populated village of Qil is also located on the same shore. This coastal village has clear waters, and on the floor of shallow sea, you can see beautiful sea urchins.

Abandoned Old Hengam village is Located on the south coast of Hengam Island. In this area you can see Persian wild deer named Jubair (gazelle).

Tourists go to the waters around Hengam Island to see sea dolphins.

The night sky in Hengam Island is a little blue (dark) and has some radiance, which is due to the reflection of light from the phytoplankton of the sea.

New Hengam village is located on the northern side of Hengam Island. Tourists who come to Hengam Island from Qeshm, come to the new Hengam beach. This beach has some local markets and home-made restaurants. Local women and girls with colorful and beautiful local dresses, are selling handicrafts made by shells and sea animals. This scenes give the village a whole new vibrancy.

One of the main attractions of the Hengam island is the presence of sea dolphins in the western and northern waters of the island. Many tourists come to Hengam Island to see these dolphins. Locals take tourists by boat to a place in the sea where dolphins can usually be seen, to watch the dolphins swim and move in groups at sea. Tourists wait for a group of dolphins to come to the surface. If you are lucky, you will often see dolphin dorsal fins on the surface of the water during this boating tour. The dolphins move en masse and during their movement they come to the surface of the water in a part of the sea and after a while they go underwater again.

The large coastal village of Salakh is located on the southern coast of Qeshm Island, at a distance of about seventy-five kilometers from the Qeshm city. Due to this relatively long distance, it is less visited by tourists, but Salkh has many tourism potentials and in the future may will be a tourism hub on the Qeshm Island.

The main occupation of the people of this Town is  fishing and you can see many fish markets here.

Salakh Bowl and Qeshm Roof are two natural attractions near the north of Salakh. The Slakh Bowl is a small desert covered with hills in strange shapes.

But the most important feature of Salakh village is the similarity of culture and rituals of the people of this village with the people of Africa and India.

In this village, traditional celebrations are held along with traditional instruments, including the Nowruz Sayad celebration in late July. Another ritual is mourning therapy (Zar Darmany), which is performed to remove some mental illnesses from the body and soul by performing traditional music.

Salakh Town and its surroundings are the main target points for tourism development projects in Qeshm.One of these projects is to create an equiped recreational, sports and health village with the name of Gambron village near Salkh Town. This modern health tourist village by attracting a large number of specialists will be used as a modern medical service center for international tourists, specially for citizens of the Persian Gulf countries  who come to Iran for medical treatment.

Numerous statues and beautiful urban symbols that have been executed in the squares of Salkh village and in its coastal park testify to the serious attention of the authorities for the growth of tourism in this region of Qeshm Island.

Salt Cave of Qeshm, the longest salt cave in the world

Qeshm Salt Cave (Namakdan Cave) includes two large caves with salt crystals. Also they have majestic openings with beautiful colored streaks around them.Springs of salt water flow on the floor of these caves and come out of the cave.

These caves are located on the southwest coast of Qeshm Island and their distance to the city of Qeshm is about 90 km.

Due to the distance and remoteness, the number of tourists in these caves is less than other tourist destinations in Qeshm.

The length of Qeshm Salt Cave has been mentioned as nearly seven kilometers and therefore it is known as the longest salt cave in the world and is registered in UNESCO World Heritage as a part of Qeshm Geopark. It is only twenty-two years since the cave was discovered by Czechoslovak cavers.

It is possible to cross parts of the cave only by crawling or go through the salt water. Ordinary tourists just need to visit the beginning of the cave.