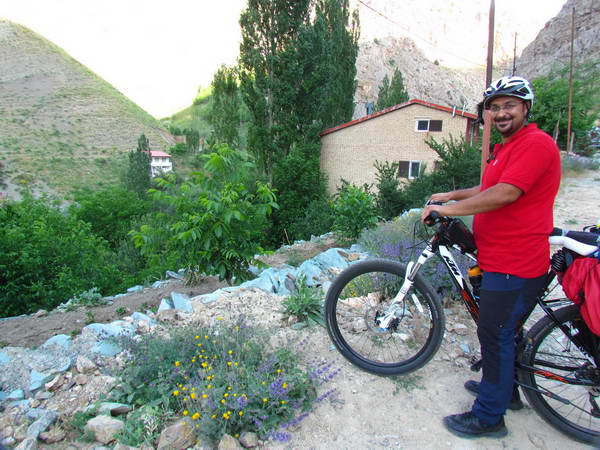 From the village of Gachsar, a side road separates from Chalus Road, which passes through a route of these areas of Alborz mountain range to Taleghan town. The first eight kilometers of this route, from Gachsar to Azad Bar village, are paved. After that, the road becomes dirt and reaches the heights of Asalak pass and from there it flows to Garab village and then to other villages of Taleghan county. The road is paved from Garab village. Gachsar River is located parallel to the first half of Gachsar-Taleghan road. This river joins Karaj river in Gachsar village. But on the other side of Asalak pass and from Garab village onwards, main branch of Shahroud river goes almost parallel to the road to Taleghan city to finally enter the lake behind Taleghan dam.

The road of Gachsar to Taleghan is about 65 km long and in this route you will pass beautiful and green villages in Taleghan county, such as Gateh Deh village, Nessa Bala village and other regions such as Garab village and Ista neighborhood.

Gachsar is a village in Alborz province, on Chalus Road, 65 km north of Karaj city. The altitude of this village is 2230 meters above sea level and it has a mild and favorable climate in summer.

Gachsar is located near the Dizin Shemshak intersection on Chalous Road, and the large and famous Dizin ski slope is only 12 km away from Gachsar. A hotel has also been built near Gachsar to receive tourists.

Garab village, in the easternmost part of Taleghan county

Garab village is the easternmost village of Taleghan county in Alborz Province. In this village, there is a river that is one of the tributaries of Shahroud river and flows towards Taleghan dam lake. The Shahroud River continues to the west after the Taleghan Dam and runs its way through the Alborz Mountains until it finally flows into the Manjil Dam (Sepid River) Lake.

Garab village also has a hot spring. We had reached the beautiful and green village of Garab after biking the dirt road from Gachsar to Taleghan and after passing the rocky dirt road of Asalak pass. The distance from Garab village to Taleghan town is about 45 km.

Gateh Deh, the most beautiful village in Taleghan county

Gateh Deh, which means a large village in Tabari language, is one of the most beautiful and attractive villages in Taleghan county in Alborz Province.

This village with its mesmerizing nature is located 35 km east of Taleghan town and on the way from Taleghan to Gachsar.

The two tributaries of the Garab River and the Kahar Valley River join in this village and form the headwater of the Shahroud River, which flows towards Taleghan and flows into the lake behind the Taleghan Dam.

The peaks of beautiful and high mountains of Kahar and Naz are located in the south of this village. A beautiful, green and full of water valley in the southern part of this village is drawn to the northern slope of Kahar mountain which reaches a waterfall at the foot of the mountain after two kilometers. This is a route to climb Kahar Peak from the northern front of this mountain.

The residents of Gateh Deh village, who generally have a favorable financial situation and are considered social figures, mostly live in Tehran and Karaj and use Gateh Deh village as their summer resort. Thus, this beautiful and well-watered village has many tourists from relatives and acquaintances of its inhabitants. The family name of the villagers is often “Kian” and “Yakan”.

Nesa Bala (Nesa Olya) village is a tourist village ten kilometers east of Taleghan town in Alborz province. Nesa Bala village has beautiful nature and there are many orchards like cherries in this village. The beauties of nature in the groves around the Shahroud River have added to the beauty of the Nesa Olya village. In this village, there are several restaurants and accommodation spaces to receive tourists.

Taleghan is a town located 140 km northwest of Tehran in Alborz province.

Because Taleghan is located among the southern slopes of the Alborz mountain range, it has a beautiful nature and a pleasant climate. Taleghan town is the center of Taleghan county, which consists of about eighty villages. Taleghan and the surrounding villages, as the summer resort of the people of Tehran and Karaj, receive many tourists.

The high peaks of Alborz, like Alam Kooh, are located in the northern part of Taleghan. Almost all the villages of Taleghan county are green and full of water and trees. There are many springs in this area.

The Shahroud River flows in the Taleghan region, on which a dam has been constructed, and the lake behind this dam, known as Lake Taleghan, stretches from the town of Taleghan to the west of the city.

There is a village or neighborhood in the east of Taleghan town which has found a special attraction for tourists due to the traditional and mysterious habits of its inhabitants, although less tourism can enter this neighborhood or village.

Due to the fact that the people of this place have adhered to their old religious beliefs and avoid the manifestations of civilization such as electricity, gas and cars, this village has been called a static village (stopped in time). Another reason for the name of this village can be considered as their stop following Mirza Sadegh Mojtahed Tabrizi, who was one of the scholars of the time of constitutionalism and considered any manifestation of civilization as forbidden and considered the government permissible only for Imam Zaman.

Although the Turkish-speaking people of this village are waiting for the reappearance of Hazrat Mahdi (Imam Zaman), they do not hold any religious festivals and mourning ceremonies and do not go on Hajj or pilgrimage. Therfore some consider them to be of the Ismaili or Sufi sect.

The houses of this village are surrounded by high walls, but if you can enter through the iron entrance door of this neighborhood, you will see the warm-hearted men of this villlage farming on their fields, who, of course, complain that tourists disturb their peace. .

The breeding of expensive horses is one of the main occupations of the people of this neighborhood.