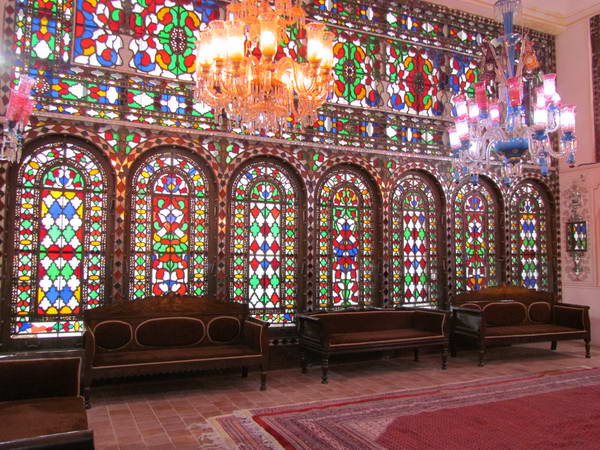 We had previously visited the famous historical monuments of Isfahan in tours 1, 2, 3, 4, 5 of Isfahan. Now we are going to visit some historical monuments that are less famous among foreign tourists. In this sixth tour, we will visit Mashrouteh House (the Constitutional House), Mollabashi House, Imamzadeh Ahmad & the Qajar royal tomb and the Angoorestan-e Malek mansion. These historical places are located a short distance from each other in the eastern region of Naghshe Jahan Square, near the historical complex of Isfahan.

Mashrouteh House of Isfahan is an old house left from the Qajar period, which has been turned into a museum related to show the events of the Constitutional Revolution and the activities of constitutionalists in Isfahan.

This home museum is located in the alleys behind the eastern side of Naghshe Jahan Square. This old and large house with outer and inner courtyards and the royal residence and nested rooms and sash with colorful windows was the residence of Haj Agha Noorullah Najafi, who is said to have led the constitutionalists in Isfahan.

Imamzadeh Ahmad Tomb is a small historical mansion in Chaharsoo Maghsoud neighborhood in the southeast corner of Naghshe Jahan Square. This tomb has a small dome with turquoise tiles and a shrine with wooden artworks. Inside of the tomb is decorated with plaster and Mogharnas artworks.

The building of the tomb of Imamzadeh Ahmad in Isfahan belongs to the Safavid period. Of course, this tomb probably existed in the sixth century AH, but during the Safavid period, the shrine, dome and decorations of the building were added to it. Then in the Qajar period, reconstructions have been done in it.

There is another historical mansion on the north side of the courtyard of Imamzadeh Ahmad, which is the Qajar royal tomb and where Amir Kabir’s wife and daughter are buried. The murals and decorations of this building are also spectacular.

There is a historical house in Isfahan, Malek Street called Motamedi House (Mollabashi Historical House) with works of Safavid, Zandieh and Qajar periods.

This house, which was on the verge of complete destruction, has now been rebuilt in more than ten years with the efforts and capital of Mr. Ahmad Motamedi and now is on the list of national monuments.

This house has an area of 1300 square meters in three parts: interior yard, Howz Khaneh (pool room) and exterior yard. This house includes Shahneshin, basement and Mogharnas rooms. Painting and mirror work are other decorations of this historical house.

Angoorestan-e malek (malekotojar) is a historical mansion with Qajar period architecture, on Malek Street in Isfahan. This building has a large yard that used to be part of the vineyard. The building  includes a dining room, a royal residence, a tomb room, a spring house and a basement cellar. Angoorestan-e Malek has beautiful Plastering decorations, mirrors and paintings, and sash doors with colorful glass.

Malik al-Tojjar, the builder of this historic mansion in Qajar period, is buried in one of the rooms of this mansion.

At present, this historical mansion is dedicated to holding religious ceremonies and mourning, but it is possible to visit it in coordination.