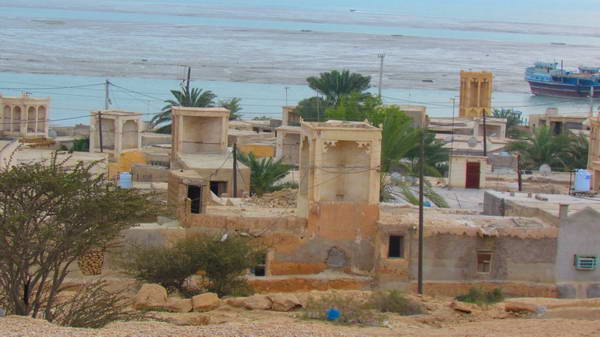 Bandar Pol is a port city on the shores of the Persian Gulf, 60 km west of Bandar Abbas in Hormozgan Province.

This city has the shortest sea distance to Qeshm Island. For this reason this port is used for the traffic of ships (landing crafts) with the capacity to carry cars to Qeshm Island.

The sea distance between Bandar Pol and Qeshm Island is not more than two kilometers.

Laft port with many windcatchers and beautiful minarets

Laft port is one of the most beautiful old ports on the shores of the Persian Gulf, located on the north side of Qeshm Island and 60 km west of Qeshm city. Laft port is located in the eastern part of Qeshm mangrove forests.

The Laft Port is usually the first place to visit for tourists who come to Qeshm Island with their own cars through the port of Bandar Pol.

One of the most important features and attractions of Laft port village is the abundant and beautiful windcatchers in this old port. Almost every house has a windcatcher tower on its roof. Although the windcatchers are short, but they have a beautiful view.

The tall and colorful minarets of several Sunni mosques in Laft village, among the windcatchers of this town, have added to the beauty of the landscape of this town.

Mangrove is an evergreen and tropical tree that lives in saltwater lagoons. Mangrove forests in Qeshm Island are located in the  bay between Qeshm Island and Khamir port on the shores of Hormozgan. This bay is called Hooran Strait.

Between the northwestern coast of Qeshm Island and the coast of Khamir Port in Hormozgan, there are swampy areas where the water level is low and at low tide, land emerges in the middle of the sea. This vast swamp area is covered with a lot of mangrove trees that have created vast marine forests in this area.

Occurrences of tides occur every 6 hours. On water retreat times you see mangrove trees that are completely on land and out of the water, but as the tide begins and the sea water rises, these trees also go under water, and at full tide they look like trees  that wander and float in the water.

Extensive mangrove forests in the Qeshm region and the coast of Hormozgan are among the most important natural ecosystems in Southwest Asia and are registered as a biosphere reserve in UNESCO.

In autumn and winter, these forests are home to countless migratory birds such as herons.

To visit these sea forests and explore among them, you can use the two piers of Soheili and Tabl on Qeshm Island. These docks are approximately 60 km west of Qeshm city.

Soheili  village is a village near the northern shores of Qeshm Island near the mangrove forests. Soheili village is located 65 km west of Qeshm city.

Boats can be rented from the coastal pier of Soheili village and in this way you can visit the mangrove forests.

Soheili pier has the most tourists to visit the mangrove forests, because the length of the pier is not very long and amenities are provided for it.

In Soheili village, several traditional restaurants and eco-lodges have been established to accommodate the many tourists in this area.

Tabl is a large village, 60 km west of Qeshm city and near the mangrove forest at north shores of Qeshm Island.

The pier of Tabal village is like a one kilometer long street in the middle of the sea. On this street pier, you will see the azure waters of the Persian Gulf along with beautiful pieces of mangrove forests. This sea street has a very beautiful view.

The Tabl pier is one of the entry points into the mangrove forest. Another source is Soheili Pier, which has more amenities and usually attracts more tourists.

Other natural attractions around the Tabl village include the two areas of Statues Valley and Qeshm Roof. These two areas are adjacent to each other and 3 km west of Tabal village.

Port of Guran is a large village on the northern shores of Qeshm Island and next to the western edge of Qeshm mangrove (Hara) forests. Guran port is located about 75 km west of Qeshm city.

Guran port is famous for its Launching industry. This port is the center for manufacturing and repairing old wooden dinghies on Qeshm Island. Visiting this village and its surroundings, you will see several Launch-making workshops.

From the port of Guran, you can also visit the mangrove forests, although the main source of boat rental for mangrove tourism is located at the Soheili wharf.

From the beaches around the port of Guran, you can see beautiful views of the mangrove forests and its birds.

In the western part of Qeshm Island and 70 km west of Qeshm city, near the village of ٍEast Chahu village, there is a gorge or valley in the heart of the highlands tat is calld Chahkooh Canyon. The walls of this valley have strange and amazing shapes. The niches and curves and twists that exist in the walls on both sides of this gorge fascinate every tourist.

The soil and rocks in this part of Qeshm Island, like most other parts of the island, are made of compacted sand. This sand structure, especially if combined with lime, is quite prone to erosion by natural factors such as water. The origin of this gorge and its strange and wonderful shapes are probably due to the influence of water and environmental factors on the land structure of this region.

In addition to the main gorge of Chahkooh, a narrower gorge or gap is located transversely in the middle of this canyon. Although the length of the straits is not very long, but they have given a unique beauty to this area of ​​Qeshm Island.

From ancient times, some wells have been dug at the floor of the main gorge of Chah Kooh to store the water that flows in this valley when it rains. In areas such as Qeshm, which have been short of fresh water, any natural method has been used to conserve rainwater. The name of the mountain well is due to the existence of these wells that were dug in the bottom of the gorge. Chah kooh means the mountain of wells in persian.