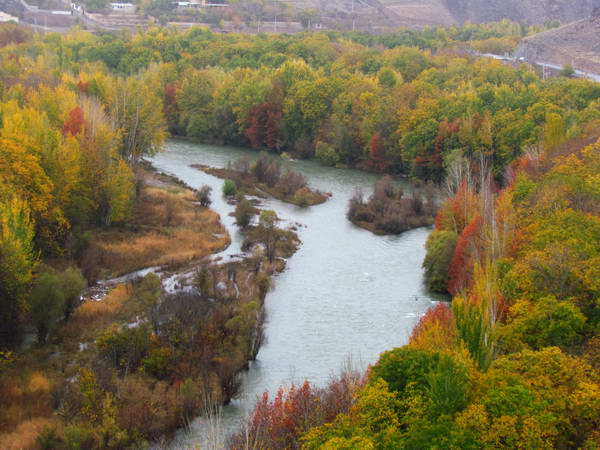 From Isfahan to Chadegan – Tour

In a two-day nature tour we see the beauties of nature along the Zayandeh Rud River from Isfahan to Chadegan Dam & Lake.
In this tour, we will visit Zob Ahan boating lake and see the historical bridge of Pol Kallleh. In Morkan village, we see the beauty of forests and farms along the Zayandeh River. We go to the tourist area of Zaman Khan Bridge and then we go to Chadegan Dam through the coastal and semi-mountainous road along Zayandeh Rud River and see the seductive beauties of the river and forests along the way. In this way we see beautiful village like Yaseh chah. Then we go to Chadegan tourist village next to Chadegan lake and spend the night in the villas of this village.

This route is suitable for biking too.

Zob Ahan Boating Lake, is 45 km from Isfahan to Shahrekord Road and near the coastal city of Zayandehrud. This area, formerly known as Lenjan, is formed by the union of several villages, which are collectively called the Town of Zayandehrud. An artificial lake called Zob Ahan Boating Lake is located in this area. Visiting and using the recreational facilities of this lake is open to the public. This lake is a good place for fishing with a lancer (hook). Heed the warning bans on swimming in this lake.

Kalleh Bridge ( Pol Kalleh ) is a historical bridge on Zayandeh River near Bagh Bahadoran city. Pol Kalleh dates back to pre-Safavid times. This bridge is located 35 km west of Isfahan.

Before the construction of a new bridge, the road from Isfahan to Shahrekord crossed the Kalleh Bridge. The view of the groves and forests along the river, as well as the view of the town of Madiseh and its turquoise dome in behind of Kalleh Bridge give a beautiful view to this historical bridge. You can see this spectacular view on the Isfahan-Shahrekord highway and before reaching the Bagh Bahadoran city road.

Morkan village on the beautiful shore of Zayandeh Rud, near Bagh Bahadoran

Morkan village is a village on the beautiful shore of Zayandeh Rud in Bagh Bahadoran area in ​​Isfahan province.

Morkan village has a newly built mosque with a large courtyard, which also welcomes tourists who come to visit the beautiful nature of the garden and groves along the Zayandeh Rud River. Part of the water of Zayandeh Rud flows as a stream in the courtyard of the mosque, the view and sound of which is soothing and doubles the beauty of the area around the mosque.

An old garden next to this mosque has been turned into an eco-tourism residence.

The texture of Morkan village is attractive and because it is built on a hillside, the village alleys are sloping.

Zayandeh Rud beach in this area is very beautiful and spectacular.

In a two-day cycling program, we cycled from Isfahan to Saman region and returned. For this program, we first cycled to Bagh Bahadoran town, 60 km west of Isfahan.

From Bagh Bahadoran town, we cycled through a narrow asphalt road parallel to Zayandeh Rud River and upstream of this river. In some parts, this road goes away from the river bank and in some parts, it approaches the river or goes to and fro through narrow metal bridges.

This narrow road passes through or near several villages that are located on the banks of the Zayandeh Rud River. Some of these villages have more natural and tourist attractions. Morkan village, seven kilometers from Bagh Bahadoran town, is one of these tourist villages. We spent the night in this village.

In this two-day program, we cycled a total of about 240 kilometers. We chose the return route through Tiran and Najafabad.

Zaman Khan Historical Bridge is the most touristic place of Zayandeh rud River in the area downstream of Chadegan Dam.

Zaman Khan Bridge is not far from Saman city. This bridge is accessible via Tiran to Saman road.

Zaman Khan Bridge was built during the Safavid period by a Khan of the Qashqai tribe called Zaman Khan.

Zaman Khan Bridge is 30 meters long  and has two bridge spans. This bridge is made of stone, brick and mortar.

One of the interesting features of Zaman Khan Bridge is that both the side and middle pillars of this bridge are not in the water but on the rocks. This feature has made this historic bridge resistant to the violent waves of the river in this narrow area of ​​Zayandeh Rud River.

There are many tourist facilities around Zaman Khan Bridge. These include parks, amenities, accommodation, mosque, toilet and recreational sports facilities such as rafting and also a wooden suspension bridge.

Many tourists come to Zaman Khan Bridge for fun or rest.

Zagros tourist residential village has also been built in the heights around this bridge.

Yaseh Chah village, with a beautiful view of the rooftops

Yaseh Chah village is one of several villages located on the Zayandeh Rud coast in the area between Zaman Khan Bridge and Chadegan Dam.

Zayandeh Rud River flows after Chadegan Dam to the place of Zaman Khan Bridge in a valley. The valley, except for the Zayandeh Rud, is full of groves and forests and several villages along the river.

The road that runs in the heights adjacent to the river and parallel to Zayandeh Rud has several ups and downs along its route. This road is located in Yase Chah village, just above the village. The view of the rooftops of the village and the space inside the houses that can be seen from above has given a beautiful and attractive view to this village.

Yase Chah houses are completely connected and there are no obvious alleys between them. In fact, the alleys of this village are covered and look like a corridor or tunnel.

The tourist road of the west of Isfahan

The tourist road of the west of Isfahan is mainly a nature tourism road that in all seasons of the year you can watch the beauties of the river and groves and hand-planted forests along the river on the semi-mountainous route that passes by the river.

All the route that is mentioned in this road is asphalt, so you can take this tourist route as a family and by car. In addition, there is the possibility of cycling on this route, especially since the coastal road of Zayandehrud is usually secluded and low traffic and suitable for cycling.

To start moving along the coastal villages of Zayandehrud, you can first start from Bagh Bahadoran city. The coastal city of Bagh Bahadoran, which is located 60 km west of Isfahan on the banks of the Zayandehrud  River, can be reached via the Isfahan-Shahrekord road.

From Bagh Bahadoran city, a narrow asphalt road runs parallel to the Zayandehrud River towards upstream of the river, which, of course, in some parts of the route away from the river bank and in some parts approaches the river, or through narrow metal bridges it crosses the river. The width of these metal bridges is only the size of a car. We continue this road to finally reach Zaman Khan Bridge.

This route passes through Isfahan and Chaharmahal & Bakhtiari provinces.

Chadegan Touristic Village is located 130 km west of Isfahan, next to the lake of Chadegan ( Zayandehrud ) dam.
This village has villas and amenities for spending leisure time of Isfahan and neighboring cities residents.