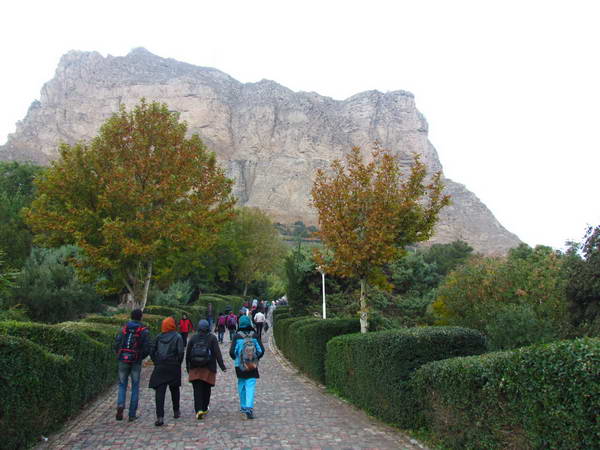 In this tour in Isfahan, we will focus on the natural beauties of Isfahan. We will visit the flowers garden of Isfahan and we will have a pleasant walk in the coastal parks of Isfahan, along the Zayandeh Rud. Then we will go to Sofeh Mountain and Sofeh Park and use the pleasant environment of this park and mountain.

Isfahan Flowers Garden, espectacular with lotus flowers on a lake

Isfahan Flowers Garden is one of the urban complexes in Isfahan that is spectacular. Do not forget to visit this garden, especially in spring and June. Because in addition to the many types of flowers that exist in this garden, lotus flowers are beautifully exposed to you in the artificial lake of this garden, along with turtles, ducks, geese and large carps that each go to one side  in this Small lake. A beautiful rocky waterfall has added to the beauty of this environment.

Coastal parks of Isfahan, on the bank of Zayandeh Rud

Isfahan Municipality is veritably one of the most active and innovative municipalities in the field of urban beautification. The manifestation of the activity of this municipality in the last two or three decades can be seen in the construction of kilometers of parks and green spaces in Isfahan. When you come to Isfahan, you will see the whole bank of the Zayandeh Rud River full of parks with trees, flowers and grass grounds. If you walk for hours, you have not yet been able to walk the length of these parks, which continue from the westernmost suburb, in Atashgah and Nazhvan to the easternmost suburb, in Pol-e Shahrestan.

It is interesting that despite the tens of kilometers of coastal parks in Isfahan, during many days, especially the weekends and holidays, you will face the problem of parking cars on the coastal streets due to the congestion of cars, because many families in Isfahan are accustomed to spend their free time in these parks. They spread the mats and tablecloths on the grass in the parks and enjoy this beauty.

Sofeh Park, a Mountainous park at the foot of Sofeh Mount

Sofeh Park, a Mountainous  park at the foot of Sofeh Mount in Isfahan is one of the vast parks in the country, which has increased the natural attraction of this mountain attached to Isfahan tenfold. And  thus this park has had a great impact on attracting many tourists and hikers to this region of Isfahan.

Sofeh Mountainous Park welcomes Isfahanies All days of the week, who come for both recreation and mountaineering.

Especially in the afternoon of the middle of the week and on Friday mornings, you will see many people and groups walking along the paved sidewalks of this park upward to the heights to experience the pleasure of mountaineering in a beautiful and eye-catching environment. These group trips show themselves as a beautiful cultural attraction for this part of Isfahan. When walking in these beautiful paths, you will see talking and laughing of Isfahanies  In this way you will see many joys between people which seeing and hearing of them, especially with a sweet Isfahani accent, can be enjoyable for you.

Sofeh Park also has recreational facilities such as cable cars, a bowling alley and a restaurant. A small Wildlife Park has also been built in the foothills of this mount.

Sofeh Mountain, attached to the metropolis of Isfahan

Sofeh Mountain in the south of Isfahan city is a relatively low mountain.

Although the height of this mountain is not more than 2260 meters above sea level, but the vertical walls of this mountain and the weak structure of the mountain rocks have made climbing from it not so easy. Unfortunately, every year we see incidents of falling from the heights of this mountain, which can be due to the large number of tourists who climb Mount Sofeh.

Sofeh mountain has three peaks close to each other. On top of the northern peak of this mountain, there is a historical castle called Shah Dezh.

There are two low water springs in the foot slops of Sofeh mountain.

A large forest park has been built at the foot of Sofeh Mountain by the efforts of Isfahan Municipality.

Every day of the week, a large number of Isfahan residents and tourists climb to the summit of Sofeh through Sofeh Mountain Park.